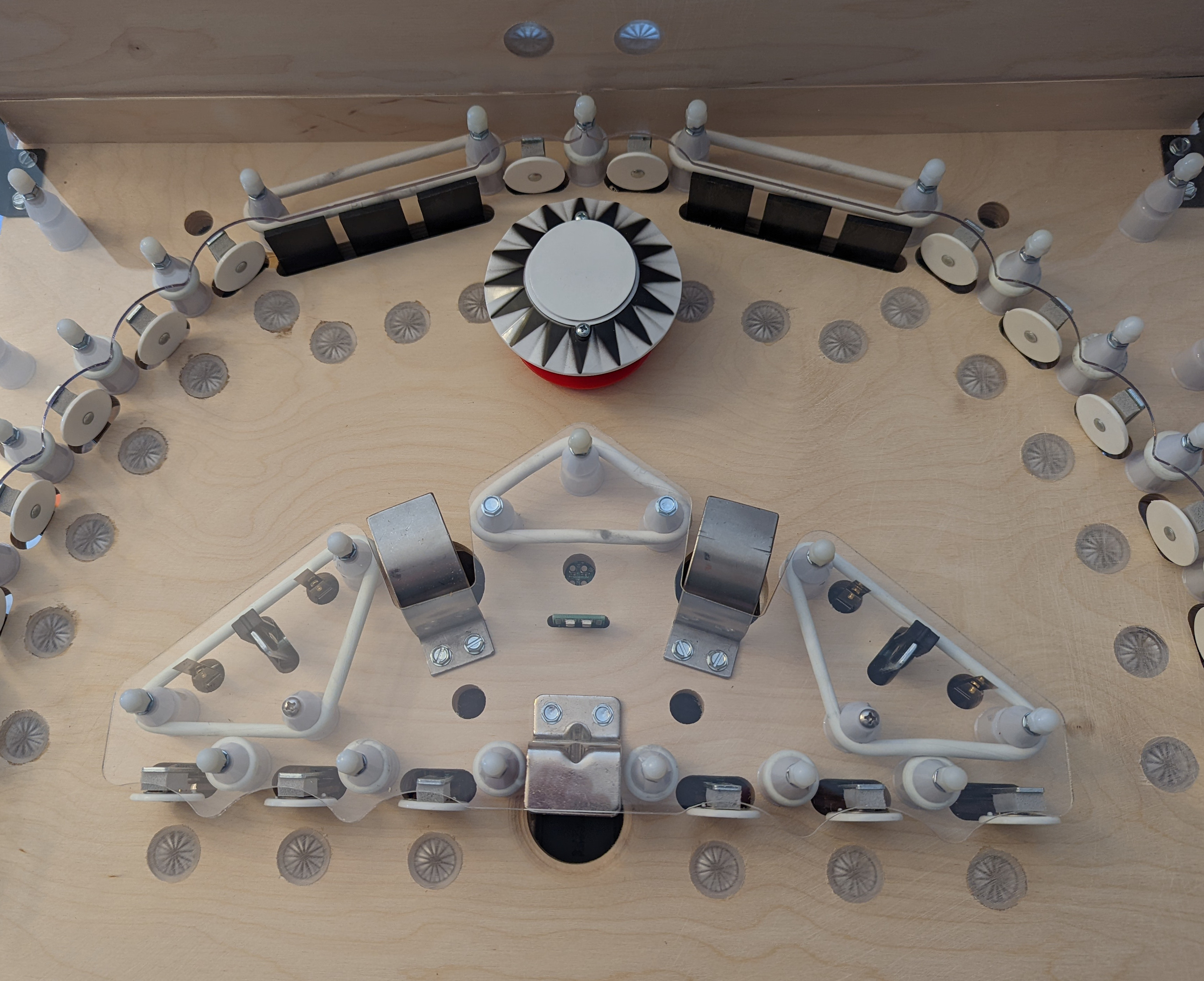 Create a commercially-released pinball game for the P3 with accompanying playfield module, while bringing a fresh spin on the classic gobble hole.

I'm interested in applying modern software design with tried-and-true playfield layouts, to engage and excite the player. The curved target banks on Gottlieb's "Target Pool" have always excited me as a player. Being able to use the upper slingshots to bank the ball off of one of the array of standup targets never gets old.

I knew when I started that I wanted to incorporate upper slingshots as well as those curved targets. As there is no shooter lane on the P3, I've added in two banks of three drop targets, two more "hidden" standup targets, and a pop bumper. The player can launch a ball directly into either bank of drop targets, and even sweep one or both banks with a perfect shot.

Below the slingshots in the playfield module, space existed to add more targets, but also a gobble hole. This gobble hole works in the same way and in a similar position to classic games. A ball entering this hole will act in the same way as a ball that drains.

As with classic games, I decided to create sequences that the player could complete repeatedly. Six targets in the arch on the left, six on the right, two at the top, and three pairs on either side of the gobble hole have different point values and effects.

For the first whitewood (playfield without artwork), I hand routed all holes for inserts, targets, and mechanisms.

I have not yet learned any CAD software well enough to create accurate plastics or pathing to cut the module, so I hired a friend (and CAD expert) Anthony Swan to produce the files needed to have the module and plastics CNC/laser cut. I then had another friend, Coleman Martin, CNC the second whitewood, and three additional sample games.

These samples will be sent to beta testers and to Multimorphic for review.

Unlike my previous games on the P3 - Quest For Glory, Ranger In The Ruins, Silver Falls, and Flipper Foxtrot Rhythm Explosion, this new project required a module definition. This is a simple JSON file that defines switches, LEDs, coils, and shot paths and distances.

Next, a module driver was needed to automatically handle certain aspects of the playfield when used on software such as "Shoot 'N Scoot" or "ROCs".

The game programming itself went very smoothly. This game uses many virtual inserts that can be added to special light shows or synchronized with other physical lamps on the playfield. The biggest challenge in developing this game has been developing the various light shows.

When the player presses start, the game will play a very short introduction for the enemy the player will be battling. Launching the ball will fire into one of the two banks of drop targets. Certain bounces will hit the pop bumper, other drop targets, or allow the ball to move down the playfield.

The player is tasked with hitting the two targets that directly flank the gobble hole to start a battle mode. Each adversary has its own set of targets to complete to trigger the final phase of the battle. Hitting the gobble hole at this point will provide the best end-of-ball awards.

Once the battle has been started, the two center walls will pop up on the P3, blocking the shot to the gobble hole. Every so often, the walls will drop and re-raise to free any potentially stuck balls. This also gives the player an opportunity to shoot the gobble hole immediately for a reduced end-of-ball bonus, but with much less risk.

If the player shoots the gobble hole before starting the battle, the player's ball will end.

Each sequence of targets provides a separate award, and they can stack. Completing the curved bank on the right side will launch a second ball into play. While a second ball is active, gameplay continues until both balls have drained. Other banks provide large end-of-ball bonuses.

Tilting removes current ball in play and removes all bonus for that ball.

Aside from hitting each target to advance the end-of-ball bonus, targets can be spotted. Spotting occurs at the start of any ball based on the total number of balls to play operator setting. Fewer balls to play award additional spots at the start of that ball. The player can also earn spotted targets by completing the word S-P-O-T in the lanes or completing the side targets to spell S-P-O-T-L-I-T-E. The only targets which cannot be spotted are the targets that start the battle mode.

A hurry-up mode occurs at random that will award many points and an additional bonus. This mode spawns a virtual target that moves in a vertical line on the screen. Unfortunately for the player, this line corresponds with the shot line for the gobble hole, so the player must hit this target accurately, or they will be at risk of losing their turn.

If the player can hit the pop bumper at least 5 times in a turn, the scores will be multiplied until the end of that ball. This is easiest to do by banking off the drop targets closest to the pop bumper on either side.

The music dynamically changes based on the background music currently playing. For example, if the hurry up mode starts, a complimentary hurry up song will play. At the start of each ball, a separate percussion track will play on a short loop, awaiting ball launch to start the full track.

Music and sound effects for this project were composed by Charles Wolf Music, who has been an excellent collaborator.

There are 17 voice actors with approximately 1300 voice callouts in the game.

Each of the 15 individual opponents has their own theme, and their own light shows. Ball end always plays the same light show (in red) to reinforce the fact that the player has lost their ball.

Aside from the normal coin per credit settings available in the operator menu, the number of balls per game can be changed (from 1-5, default 5), and the gobble behavior can be modified on a per-profile basis.

Viewers of players streaming the game can interact with Twitch-Connect by starting a hurry up mode, spotting a random target, blanking out the screen, or reversing or inverting flippers. These integrations can be enabled or disabled individually, and if the streamer is partnered or a Twitch affliate, they can charge a custom number of bits per interaction.

I'm excited to get the game into others' hands to see what they think of the gameplay. It's quite different from a typical modern game, and I hope it will stand out in a relatively crowded marketplace and appeal to those looking for something unique.